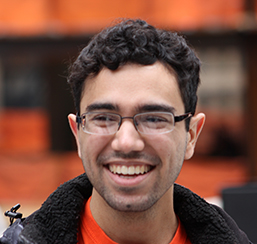 Kahlil Maskati is a 2015 graduate of New York University’s prestigious Tisch School of the Arts—Maurice Kanbar Institute of Film and Television. His short film, EMPLOYEES MUST WASH HANDS, won the 2014 Oliver Stone Screenwriting Award and has been selected into several festivals. In 2012, Maskati was chosen among tri-state area film students to interview Peter Jackson as part of mtvU’s #ASK web series. He was cast to voice act alongside Whoopi Goldberg in her YouTube web series, “Can of Whoop Cartoons,” which premiered online in 2014. His animation, SECRET AGENT DANNY JUMBALAYA, was selected to the Spring 2015 NYU Animation Showcase and won the James Richard Janowsky Award. Based in New York City, Maskati is a passionate screenwriter, director, and animator with a child-like imagination and a focus in comedy.